Daughter of the Blood by Anne Bishop 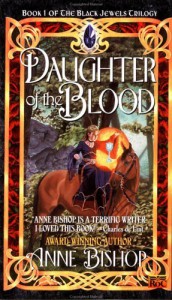 This book is set in an extremely dark world created by Anne Bishop, in which women rule over men. Sounds great for us females, doesn't it? I thought so too. However, most of the women you'll meet in Terreille are vicious bitches. Using men as pleasure slaves and torture objects (including complete castration) kind of bitches. They're hard-core and very emotionally attached to their wavering positions of leadership.

In Terreille, the Blood are the ruling class. Among them, there are distinctions based on Rank and Jewels, the darkest being the most powerful. The Jewels are recipients of power, yet they do not determine one's position in society. A good example would be that of Surreal, a prostitute whose Jewel is Gray, the third most powerful out of thirteen.

In order to control the men who pose a threat to their position, the ruling assembly of witches enslave them by using the Ring of Obedience, which is attached to their penis, causing sharp pain and molding them to their will. Daemon Sadi and Lucivar Yaslana are two Princes made slaves in this way. Bastards and half-brothers, they serve women after hateful women, roaming the various courts of Terreile, losing their hope as the centuries go by, leaving them physically unscathed, but mentally worn-out.

Seven hundred years before, Tersa, a Black Widow, had foreseen the arrival of the Witch, a Queen of unspeakable power and influence who would return Terreille to its rightful path. Dreams made flesh, she is the one Daemon and Lucivar have been expecting. She is the one no one would ever hesitate to serve with their lives. She is also a child. At twelve, Jaenelle Angelline is capable of more than any thousand-year-old witch. She already wears the Black Jewel. The world has never seen anyone as powerful as she is, capable of magic never before accomplished.

Surrounded by men who worship her, ancient creatures who had long lost their hope, Jaenelle flourishes, learning the Art from the High Lord of Hell himself, Saetan SaDiablo, Daemon and Lucivar's father. He is, along with his son Daemon, the most powerful of the Blood. That is, until the arrival of the Witch. Together, they form the four-sided triangle of the Blood: father (Saetan), brother (Lucivar) and consort (Daemon), united by the central piece, the Witch/Queen (Jaenelle).

A warning, dear reader. This is an extremely intricate book with an elaborate world-building component. You must be open-minded and try to transport yourself into it, instead of comparing this fictional reality to your own. Yes, it will be highly immoral and it will shock you more often than not, but it will also manage to enchant you with its strangeness and its blatant violence. I strongly advise this book for those who are brave enough to dive into it!